Nineteen types and subtypes of elephant herpesviruses are currently recognized. They all belong to the order Herpesvirales, which consists of over 300 known characterized virus species that infect many types of host organisms ranging from oysters to frogs, fish, birds, mice, humans and elephants. These are double-stranded DNA viruses with icosahedral capsids surrounded by a tegument and envelope that contain amongst the largest of all viral genomes, represented by a single DNA molecule each of between 140,000 to 250,000 nucleotide base pairs in size (ie = 140 to 250-kb). These DNA molecules encompass between 70 and 160 distinct protein coding genes. Amongst those genes only about 40 “core genes” are shared in common between all three subfamilies of mammalian herpesviruses, whereas the remaining genes are either conserved just within certain subfamilies or genera, or instead are unique to an individual herpesvirus species. There are nine species of human herpesviruses, the best known being the alphaherpesviruses HSV and VZV, the betaherpesvirus CMV and the gammaherpesviruses EBV and KSHV. 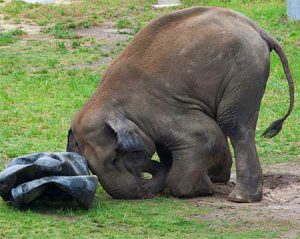 Diagnostic detection of active EEHV infections carried out at the National Elephant Herpesvirus Laboratory at the Smithsonian’s National Zoo in Washington, DC uses a set of specific DNA polymerase chain reaction (PCR) assays to test elephant necropsy tissue and blood from suspected sick or dead elephants exhibiting signs of acute hemorrhagic disease. These have confirmed 46 cases of high level systemic disease in the USA and Europe, of which just ten that were all treated with antiviral drugs are considered survivors. All but five of these cases have involved young Asian elephants (predominantly between the ages of one and eight years), with just four examples known in African elephants. More than a dozen lethal cases have been confirmed similarly in Asia as well. However, numerous other closely monitored captive Asian and African elephants have been found to have brief transient episodes of EEHV viremia with only mild or no clinical symptoms and much lower levels of viral DNA in blood followed by a period of shedding in trunk washes and saliva. Similarly, almost all healthy African elephants examined that exhibit localized skin or lung nodules have also been found to harbor multiple types of EEHV (but these are different than the EEHV types found in Asian elephants).

Extensive additional viral DNA sequencing analysis targeted to specific key genes has been carried on many of the cases and recently the complete 180-kb genome has been deciphered for several EEHV species and strains. Phylogenetic (or family tree) analysis of this data has revealed a great deal of genetic variability amongst and within the many EEHV types that infect Asian and African elephants. Of the 12 different species identified, seven are classified as Elephant Endotheliotropic Herpesviruses (EEHVs) within the Proboscivirus genus, and the other five are called Elephant Gammaherpesviruses (EGHVs). The EEHVs are so novel that they may in the future become known as a new fourth sub-family of mammalian herpesviruses, the deltaherpesviruses. All the EEHV types may be capable of causing hemorrhagic disease, although with different degrees of severity (pathogenicity), but the EGHVs are not known to be associated with any disease conditions.

Overall, the EEHVs themselves cluster into two major branches that differ by 35-40% all the way across their genomes, with one group having an average G plus C content of just 42% and the other having a G plus C content of 63% . By phylogenetic tree comparisons with the DNA molecules of other herpesviruses, it is evident that the Proboscivirus genus started to evolve separately from all other mammalian herpesviruses about 100 million years ago, corresponding closely to the time that the ancestors of modern elephants and the extinct mastodons and mammoths separated from all other groups of placental mammals. Even the most conserved essential core herpesvirus proteins encoded by the EEHVs are all at least 50% different at the amino acid level from their counterparts (orthologues) in other herpesvirus subfamilies. There are a total of about 115 genes encoded in the entire 180-kp (= 180,000-bp) EEHV1 genome, but only 45 of them are recognizably related to known genes that are shared in common with even the closest other herpesvirus subfamilies, whereas the rest are mostly novel genes encoding proteins that have not been seen before. Within the A plus T-rich branch, EEHV1 and EEHV6 differ uniformly by about 17% at the DNA level, as also do EEHV2 and EEHV5, and these two sister clades themselves differ by about 27%, corresponding to evolutionary divergence dates from their last common ancestors of close to 12 million and 20 million years ago. Similarly, within the G plus C-rich branch, EEHV3 and EEHV4 differ by about 8% (6 million years divergence) and both of them differ from EEHV7 by about 15% (12 million years divergence).

Amongst the total of 42 cases of lethal EEHV disease or moderate symptomatic viremia that have been evaluated in Asian elephants, 31 were caused by EEHV1A, nine by EEHV1B, one by EEHV3A, two by EEHV4 and one by EEHV5A, whereas the only two known lethal cases in African elephant calves were caused by EEHV2, with one case each of mild viremic disease associated with EEHV3B and EEHV6. Only for the single lethal example of EEHV3A in an Asian zoo calf is there evidence indicating a likely cross-species transmission from an African elephant. Otherwise EEHV1A, EEHV1B, EEHV4, EEHV5A and EEHV5B are judged to be natural endogenous infections of Asian elephants and are rarely if ever found in African elephants. In contrast, EEHV2, EEHV3A, EEHV3B, EEHV6, EEHV7A and EEHV7B are commonly found in localized lung nodules or skin nodules or being shed in saliva of asymptomatic adult or juvenile African elephants both in the wild and in zoos. Therefore, the latter EEHV types are evidently all natural, nearly ubiquitous and predominantly harmless infections of African elephants.

The unusual chimeric (or hybrid) subtype pair of EEHV1A and EEHV1B have partially very similar and partially very different genomes, suggesting that EEHV1B was generated by ancient recombination events between one particular sub-lineage of EEHV1A with another unknown species of EEHV. The entire 180-kb genomes of EEHV1A(Kimba), EEHV1A(Raman), EEHV1B(Emelia) and more recently also EEHV5A(Vijay) have now been completely sequenced and annotated versions are available in the NCBI Genbank database In contrast, DNA sequence data for the EGHVs is largely limited to just a 480-bp segment of the DNA POL gene, which reveals that they are highly diverged from one another, with EGHV1 and EGHV2 as well as EGHV3 and EGHV4 forming the most closely related branches. Intriguingly, at least three of the five EGHV species also split into consistent and readily distinguishable subtype-like pairs that differ by 3.5 to 5% at the nucleotide level with one set (As) being found only in Asian elephants and the other (Bs) only in African elephants.

EEHV1 genomes can be further subdivided and classified not just into the EEHV1A and EEHV1B sub-species, but also into multiple clusters of evolutionarily and epidemiologically distinctive strains and genotypes (or gene subtypes). This is based on DNA sequence data obtained at multiple targeted PCR loci across the genomes of 42 different EEHV1 “isolates”, most of them associated with hemorrhagic disease cases in North America and Europe, as well as nine more from India. The term “strains” is used here to indicate independent not epidemiologically related genomes based on the totality of the DNA gene loci analyzed (ie equivalent to genotypes), whereas the term “gene subtype” is reserved to refer to specific distinctive clusters (or clades) with closely related sequence patterns within each single “variable” gene locus. Therefore, the overall strain or genotype designation of each isolate represents the summation of the “gene subtypes” found at multiple loci across the genome. This analysis identified over 38 different strains of EEHV1A (33 that caused symptomatic disease and five that were associated with asymptomatic viremia) plus eight different strains of EEHV1B (four lethal and four asymptomatic).

This very high level of genetic variability has been used to address a number of epidemiological questions about the distribution of EEHV strains worldwide and the roles of individual EEHV types in disease. The most important findings can be summarized as follows: