In particular, Mr. Berens made no effort to provide updated current information on the subject, leaving the reader with the mistaken impression that EEHV disease occurs just in zoos, that it can be somehow avoided through “infection control” and that it is spread by moving elephants around between facilities for breeding purposes. Instead, the scientific facts are that elephants are naturally infected with up to a dozen different kinds of herpesviruses (just as there are eight kinds of herpesviruses in humans) and just as in humans, most elephants carry several of them in a dormant or latent state throughout their lifetimes. As in humans, these viruses occasionally reactivate in body fluids for transmission to other individuals with which they come in contact. Adult African elephants carry four types of EEHV that can be found in benign skin and lung nodules as well as in saliva, and most healthy Asian elephants may routinely carry up to three more different types of EEHVs that can occasionally be detected at low levels in blood or when secreted in trunk washes. The EEHV family has evidently been coevolving together with their hosts the ancestors of both modern species of elephants for over 100 million years. 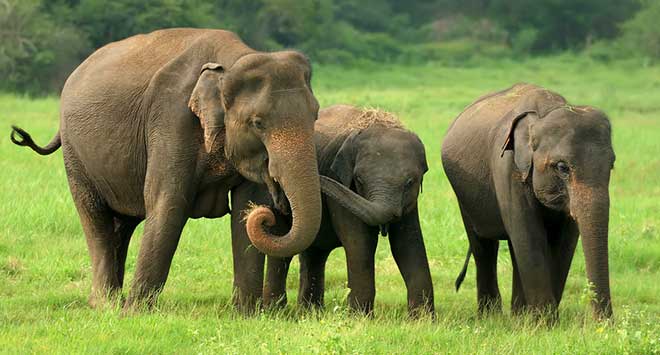 Only two subtypes, known as EEHV1A and EEHV1B, have caused the vast majority of cases of acute EEHV hemorrhagic disease, resulting in the deaths of 50 young Asian elephants in Europe and America over the past 25 years. The deaths of at least 45 Asian elephant calves in Asian range countries including India,Thailand, Myanmar, Cambodia, Nepal and Sumatra within just the past ten years have also been attributed to EEHV. Another 2-year-old calf in Nepal was reported to have succumbed just a day before that article. Thus far, 36 genetically distinct strains of EEHV1A and EEHV1B have been identified in European and American cases of the disease and 8 more from cases in Southern India. The large genetic differences found amongst EEHV1 strains indicate that these are not new emerging infections, but that Asian elephants are their ancient natural hosts.

Not a single instance has been found where a particular strain of EEHV1 has been transmitted between two different elephant housing facilities, although several examples of two animals at the same facility being infected with an identical strain have been documented. Some monitored Asian elephants have become sequentially infected with EEHV1A, then EEHV1B and then also EEHV5, without any disease symptoms. The puzzle is not that elephants carry multiple EEHV types, but why do 20% of Asian elephant calves worldwide, both in zoos and in the wild, become susceptible to devastating uncontrolled disease when first infected by EEHV1A or EEHV1B, whereas 80% of the Asian elephant calves and almost all African elephant calves (living under the same conditions) are able to control all of their EEHV infections.

Most zoos are non-profit and some of their earnings provide the major sources of the very meagre funds available and necessary for scientific research on wild animal diseases. The people who work there are caring skilled professionals dedicated to the long term care and survival of Asian elephants worldwide. The only way that sufficient knowledge about and research into EEHV and other wildlife diseases, and ultimately effective drugs or vaccines can be found, is through studying breeding elephants housed in developed countries like the U.S., which have sophisticated modern scientific resources. This knowledge and experience can then be employed to lessen the impact of such diseases on the remaining stressed populations of Asian elephants in their dwindling habitats in range countries.

Inaccurately portraying the status of a naturally occurring disease in both captive and wild populations of Asian elephants is a disservice to the public and to this highly endangered species.