In addition to the more than 50 known cases in Western countries, there have been alarming reports of between 25 and 35 plausible cases of EEHV-associated hemorrhagic disease in Asian elephant calves within in situ range countries in recent years. This includes multiple cases from Southern India, Thailand and Myanmar, plus just a few instances only so far from Assam, Cambodia, Nepal and Sumatra. Whilst up to 15 of these cases are now PCR sequence confirmed, most of the early reports were anecdotal, beginning with a case seen by the late Dr Krishnamurthy in Southern India in 1997, with at least five others being recorded there between 1997 and 2005. A brief report on an early PCR confirmed case in Cambodia (= EEHV1A) was published by Reid et al (2006). As many as five possible cases in Thailand, including two from the Chiangmai area, were also first described by two groups at the International Elephant Foundation (IEF) Symposium on Elephant Conservation and Research in Pattaya, Thailand in Nov 2008, along with additional Indian cases. Overall, nine DNA-positive cases from India (Zachariah, et al, 2013) plus four from Thailand (three EEHV1A and one EEHV4; Sripiboon et al, 2013) are now recorded in Genbank and one case in Nepal (S. Suraj, S. Long and D. Karmacharya, pers comm) as well as two in Sumatra (C. Stremme, A. Zachariah, pers comm) have also been DNA sequence confirmed. 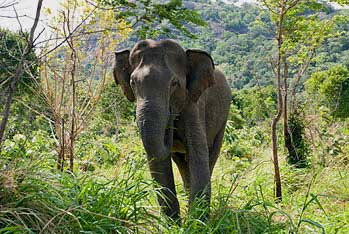 Detailed pathological descriptions of up to 15 suspected cases examined during field necropsies in Southern India were presented by Wildlife Forest Veterinary Officer Arun Zachariah at both the November 2008 IEF Symposium on Elephant Conservation and Research held in Pattaya, Thailand, as well as at the next IEF symposium in Pretoria, South Africa in Feb 2010, and again at the 8th Annual International EEHV workshop held in Houston in Feb 2011. These latter studies showed the disease in Asia to be exactly the same as that reported in ex situ cases, with focal hemorrhaging or pettechia present in most major organs and including the detection of typical EEHV nuclear inclusion bodies in vascular capillary endothelial cells by photomicroscopy (Zachariah et al, 2013). Victims of the acute form of this disease display initial edema, tongue cyanosis and lethargy followed by increasingly high levels of EEHV DNA in blood and finally even in serum samples. Most importantly, Zachariah has collected and stored frozen necropsy tissue samples from these and numerous other sudden elephant deaths over the whole South India Nilgiri Biosphere Reserve, which encompasses the largest remaining elephant population (about 10,000 individuals) amongst the now highly fragmented range in Asian countries. Several of these latter cases occurred in calves observed fortuitously within free-ranging forestry herds, but obviously the ability to detect and confirm cases in free-ranging wild elephants is considerably more difficult than in orphans being raised at training camps or in sanctuaries.

Working together with visiting teams (E Latimer, LK Richman, SY Long, J-C Zong and GS Hayward) from the Smithsonian’s National Zoo in Washington (NEHL) and the Johns Hopkins University (JHU) groups, A. Zachariah established functioning EEHV PCR diagnostic assays in his laboratory at the Wayanad Wildlife Sanctuary in Kerala between 2008 and 2011. Direct PCR amplification and multi-locus DNA sequencing was successful from 9 necropsied cases of hemorrhagic disease tested there (Zachariah et al, 2013). Gene subtyping across parts of genes named POL, TER, U71/gM, gH and vGPCR, revealed seven distinct strains of EEHV1A and one of EEHV1B. Two cases from calves that died within a few days of each at the same facility in Dec 2007 (Nirangen and Aswathi) gave identical DNA sequences at all four loci examined in multiple tissues of both animals, showing that their infections were directly epidemiologically connected. However, the other eight cases, which came from different locations and at different times across South India, were all readily distinguishable showing a wide range of genetic variability, especially in the thymidine kinase (TK) gene and in the chemokine receptor (vGPCR1) gene, which included examples of subtypes E, E/A, D2, C1, B1 and A2. Nevertheless, these cases still closely resemble and fall within the range of variability already seen amongst the 35 other EEHV1A or EEHV1B cases and strains characterized previously in pathological samples from Asian elephant cases in North America and Europe (Richman et al, 2014). Unfortunately, there are no samples available from the many possible suspected cases in Myanmar forestry camps (Oo, Z, pers. comm.) and additional more recent cases in India (Zachariah A., pers. comm.) have still yet to be tested. Furthermore, several of the few pathological samples available from the wild in India were of very low quality and the numbers of positives could have been underestimated?

Overall, the range of genetic variation amongst the EEHV1 strains encountered in India makes it very clear that this disease was not just recently introduced into Asian elephants from a few African elephants that they may have encountered within Asia, as was originally theorized. Instead, both EEHV1A and probably also its chimeric variant EEHV1B must be natural endogenous viruses that have co-evolved for a long time with Asian elephants. Although the earliest studies suggested that skin nodules found in several African elephant calves in Florida in the 1980s contained EEHV1 DNA (Richman, 1999, 2000), that result could not be repeated in more recent attempts to evaluate the same archival paraffin slide sections and was therefore most likely an error. On the other hand, no EEHV-related hemorrhagic disease has yet been reported within Africa, but the original finding (Richman et al, 1999, 2000) of a different species of EEHV, namely EEHV2, in both a rare lethal case of hemorrhagic disease in an African elephant calf from a USA zoo, and in a lymphoid lung nodule from a culled adult African elephant in South Africa, have been DNA-sequence confirmed (Richman et al, 2014). Two other different EEHV species called EEHV3 and EEHV6 were also later detected in viremic blood from two mildly ill African elephant calves in the USA (Latimer et al, 2011; Bronson E et al in preparation). Additional extensive studies on lung nodules from two culled adult wild African elephants and an asymptomatic euthanized adult African elephant in the USA have detected multiple strains of EEHV2, EEHV3, EEHV6, and/or EEHV7, but no examples of EEHV1 (Zong J-C et al, submitted). More recently, detailed studies by Virginia Pearson (Princeton University and Fox Chase University) on skin nodule biopsies from eight juvenile wild African elephants collected together with local wildlife veterinarians in Kenya, Botswana and South Africa, as well as in saliva swab samples obtained from adult African elephants in several USA zoos, have also detected multiple examples of these same four EEHV species, including new B-subtypes of EEHV3 and EEHV7. In addition, both Elephant Gamma Herpes viruses (EGHVs) and Elephant Polyoma virus are also commonly found in these skin nodules (VR Pearson, pers comm.).

Therefore, EEHV2, EEHV3, EEHV6 and EEHV7 are now all presumed to be endogenous and largely non-pathogenic viruses of African elephants, whereas EEHV1A and EEHV1B are the predominant pathogenic EEHV species found in both wild and captive Asian elephants. Although no samples of either lung or skin nodules from Asian elephants have yet been recorded or become available for analysis, there is also accumulating evidence that EEHV5 and more recently EEHV4 (Garner et al, 2009; Latimer et al, 2011; Atkins et al, 2013; Zong et al, 2014) are occasionally shed in trunk washes from Asian elephants in USA zoos. Very low levels of EEHV1, EEHV4 and EEHV5 DNA (but not EEHV2, EEHV3 and EEHV6) were also detected by sensitive real-time PCR in trunk washes from several asymptomatic camp elephants in India (Stanton et al, 2013). Therefore, both EEHV5 and EEHV4 may also be natural endogenous viruses of Asian elephants. However, the abundance, distribution and pathogenic potential of EEHV5 and EEHV4 relative to EEHV1A and EEHV1B in either captive or wild Asian elephants are not yet known.

In conclusion, acute hemorrhagic disease occurring amongst orphan and sanctuary calves and in privately owned and free-ranging elephants in Asian range countries is exactly the same disease as that seen in captive ex situ elephants in Europe and North America. It is predominantly caused by EEHV1A, but one lethal case each of EEHV1B and EEHV4 have also been documented. Some of these results were presented by the author at the First International Conference on Asian Wildlife Conservation sponsored by the Wildlife Disease Department held at the Tamil Nadu Veterinary and Animal Science University in Chennai, India in Mar 2010. Additional studies to attempt to assess which species and strains of EEHV are endogenous in healthy elephant populations in all Asian range countries are urgently needed, and pathological examination as well as collection and storage of frozen blood, tissue or DNA samples needed for virus confirmation and sub-typing from all suspected cases is highly encouraged.